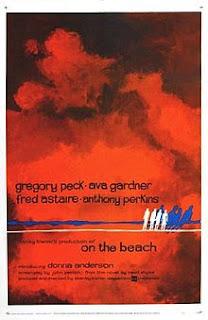 Years before John Frankenheimer made his "paranoia trilogy", Stanley Kramer had audiences on edge with his film On the Beach. Depicting the aftermath of nuclear war, Kramer provides commentary on an era when everyone was on edge, not knowing which country would push the button first.

Gregory Peck possesses a look of dread throughout On the Beach. That's because Towers lost his family from the radiation. He knows what kind of devastation it can cause. In fact, Peck himself was heavily opposed to nuclear weapons, so perhaps his beliefs were put into his work as Towers.

Ava Gardner plays Moira as a woman who accepts her fate but reluctantly. She drinks her worries away, but new ones emerge from each sip. She is worn out by what has happened and wants it all to end. A far cry from her glamorous roles, don't you think?

The two supporting actors are Anthony Perkins and Fred Astaire. Perkins plays his part with a sense of uncertainty. Like his famous role of Norman Bates, Peter wants to keep his future bright but each passing day makes it appear darker. Astaire is revelatory in his role. Gone are his days with Ginger Rogers, and here is a new stage in his career. His part of Julian displays a depth not many would've imagined as they watched Astaire dance in the years before. And it took him fifteen years afterwards to get nominated?

Like Kramer's other productions, On the Beach contains excellent work from its principal actors. Saying who gave the better performance is hard. That's because Kramer knew how to get great work from his ensemble casts. And the speech Julian gives on the world going crazy with nuclear weaponry is unsettling because it can be applied today, a whole fifty-three years later.