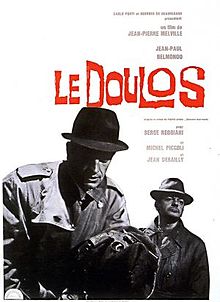 Jean-Pierre Melville's Le Doulos was probably one of the few early films that depicted lives both on the run and behind the badge. Of course, this was before Sidney Lumet depicted such lives.

The criminals take their sweet time in planning their crimes, making sure every detail works in the long run. But as we all know from countless crime movies, not everything pans out as it should.

On the flip side, the police have to be at the top of their game. After all throughout Le Doulos, sometimes the criminals are a step ahead of the police. The other times, however, the police know everything.

The switching from criminal to police is a nice touch. Decades before Martin Scorsese did such a thing with The Departed, Melville does a nice examination of both sides of the track. However, he does tend to focus on one more than the other.

Le Doulos is a fine portrait of the criminal life. It has its flaws, such as underdeveloped characters and a primary focus on violence. Still though, Melville shows his audience the very thin line between law breakers and law makers.