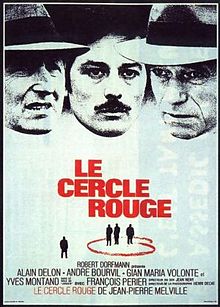 The two main characters of Jean-Pierre Melville's Le Cercle rouge are both criminals. One is fresh out of jail, the other is on the run. Both are distant from any sense of emotion, but they both know how to calculate the perfect crime.

The newly released prisoner is Corey (Alain Delon). His expression never changes throughout the course of the film. He remains blank, devoid of anything. He possesses a permanent steely stare, surveying everyone and everything around him.

The escapee Vogel (Gian Maria Volonte), however, is the opposite of Corey. He's on edge, watching every move he makes. When it comes to planning the heist, he leaves all the work to Corey. He knows Corey knows what he's doing.

The curious thing about Le Cercle rouge is that Melville doesn't mention what crimes got Corey in jail and Vogel arrested. Not even a slight hint. What could it have been? Robbery? Kidnapping? Murder? Again, no one knows. That adds to the allure of the film.

Le Cercle rouge is very good. Not as great as Army of Shadows, but on a similar level. Again, Melville knew how to capture the criminal underworld, and this is solid proof.