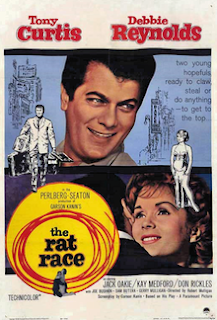 What Robert Mulligan's The Rat Race shows us is that even if you know what you're going to do, things won't pan out as you want them to.

Such is the case with Pete Hammond, Jr., played by Tony Curtis. A musician from Milwaukee, he aspires to make it big upon his arrival to New York City. But within the same day as his arrival, Pete realizes that some things are easier said than done. Fortunately, he's an optimist.

If Pete is the optimist in The Rat Race, then Peggy Brown (Debbie Reynolds) is surely the pessimist. Her behavior says she has been there and done it twice. She probably had the same attitude on life as Pete upon her arrival to New York City but thanks to people like her boss Nelson Miller (a disturbingly effective Don Rickles), her attitude went sour.

Like Mulligan's most famous work To Kill a Mockingbird, The Rat Race examines society and the people within it. Peggy constantly tries to bring Pete back down to reality while at the same time he tries to lift her out of her dreary frame of mind. It's a losing battle on Peggy's part, though Pete isn't victorious either.

I think what I liked best with The Rat Race is that in a way, Curtis and Reynolds were displaying their own personalities within their performances. He is content with his past but is very uncertain with his future while she is completely disillusioned from her recent past. (Bear in mind this was made when Curtis was still trying to make a name for himself as a serious actor, and Reynolds was in the aftermath of her highly publicized divorce with Eddie Fisher.) Don't believe me? Watch it for yourself.