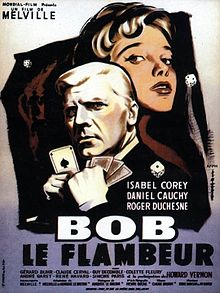 We've heard of countless American directors naming those from foreign countries as influences. (Do the names Bergman and Fellini ring a bell?) What about the other way around?

In this case, it's Jean-Pierre Melville. He was an admirer of all things American. (His surname is, of course, in reference to the author of Moby Dick.) But what he loved most from American culture were its films, Howard Hawks and John Ford in particular.

Naturally, Melville's love of American film would contribute as an influence for his own work. Such is the case with Bob le Flambeur, which many consider the beginning of the French New Wave. The main character of Bob Montagne (Roger Duchesne) in a few early scenes wears a fedora and a trenchcoat in a similar manner to that of Humphrey Bogart. The use of seedy locales implicates that Melville had his fair share of film noir.

What makes Bob le Flambeur so interesting (and an influence on films in the years to come) is that it gives the audience time to learn of the characters' personalities. Only bits of the robbery's planning are shown throughout rather than showing the actual crime. Slick move to be honest.

Bob le Flambeur is very good, though it does feel slow in parts. However, one can pick up as to how both the film and Melville are now considered influences. That alone is worth a look.