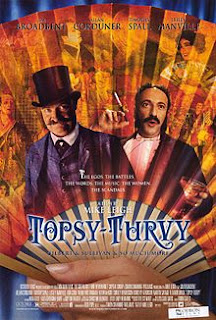 Life in the world of theater isn't exactly the easiest type in the world. One has to remember their lines word for word as they perform for dozens if not hundreds of people.

Theater life has been depicted numerously in the form of film, most famously Joseph L. Mankiewicz's All About Eve and John Cassavetes' Opening Night. Another fine example is Mike Leigh's Topsy-Turvy. Set in 1885 England, Topsy-Turvy showcases a witty behind the scenes look at one of the most famous stage productions.

The production is The Mikado, created by W.S. Gilbert (Jim Broadbent) and Arthur Sullivan (Allan Corduner). The concept of a Japanese opera sounded silly at first to Sullivan, then to the actors and finally the audience. But Gilbert was confident enough to go through with the idea (even if he wasn't as confident on opening night).

The most amusing scene was when the actors were being fitted for costumes. The women objected to wearing a costume where their corsets weren't needed, and a male actor was appalled at the length of his robe which was just barely past his knees. Oh, how the times have changed.

For a film clocking in at 160 minutes, it could have fallen flat on its face in the first hour. Leigh makes sure not a minute is wasted. Each scene is a joy to watch and all of the actors play their parts extremely well. A moment to look out for: when Gilbert gets the idea for The Mikado in his mind. The look on his face is priceless.