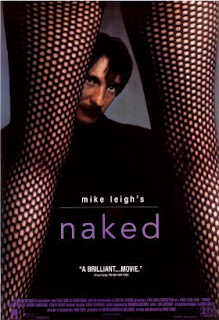 The first moments of Mike Leigh's Naked shows Johnny (David Thewlis) doing what he does best: abusing women. The use of a (very) shaky camera captures the whole mood of both the scene and the film.

Thewlis plays Johnny as someone who's never happy and always restless. He's not afraid to speak his mind, regardless of what anyone might think. Yet Johnny is as vulnerable and damaged as everyone around him. In short, a hell of a performance from Thewlis.

Sophie (Katrin Cartlidge) is someone who longs for someone by her side. She's not picky. She'll take anyone who looks promising. So when Johnny shows up, Sophie thinks he'll become the man in her life. Or so she thinks.

Jeremy (Greg Cruttwell) is somewhere between being a cleaner Johnny and a British Patrick Bateman. He's a sharp dresser and has a tongue to match. He could care less about anyone but himself. In short, he's the kind of guy you want to kick where it matters.

Along with containing strong performances from its principal actors, Naked also gives a glimpse of working class London. It's hard to watch at times (mainly those scenes with Jeremy), but those other times you simply can't your eyes off the screen. Also, the music by Andrew Dickson is to die for. And if glimpses of working class society are what Leigh does best, then I will most definitely continue to watch.