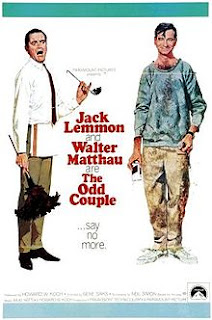 There's always that unique quirk about dark comedies. It's hard to figure out why that is. Believe me, I've seen enough to ask such a thing.

One good example is Gene Saks' The Odd Couple. It most definitely fits the criteria for a dark comedy. After all, its two main themes are suicide and divorce.

As you probably know by now, Jack Lemmon is one of my favorite actors. He could do drama and comedy, a true sign of a skilled actor. Here in The Odd Couple, he portrays the sympathetic mensch he was known for. But like C.C. Baxter, you support Felix Ungar practically the minute he's introduced.

Walter Matthau was a great character actor, and The Odd Couple shows as to why. He always worked so well with many of his co-stars, and Lemmon's no exception. After all, I saw how funny they were together in The Fortune Cookie.

All in all, I just loved The Odd Couple. The jokes are still funny, snappy and smart. Though I must add something. I wonder if there was a similar live-in situation between Joe and Jerry before everything that happened in Some Like It Hot?

My Rating: *****
Posted by MovieNut14 at 11:16:00 PM
Email ThisBlogThis!Share to TwitterShare to FacebookShare to Pinterest
Labels: 1960s, movies, reviews