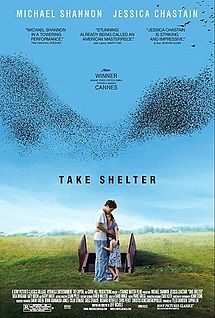 Jeff Nichols' Take Shelter is a very intense film through its actors. Its depiction of descending into madness could be compared to that of Howard Hughes in Martin Scorsese's The Aviator and Col. Nicholson in David Lean's The Bridge on the River Kwai.

Michael Shannon has been in Hollywood for years, acting in bit parts and supporting roles. Thanks to his scene stealing (and Oscar-nominated) work in Revolutionary Road, he's now getting the recognition he deserves. Shannon's past roles always managed to garner the audience's attention. His work in Take Shelter proves that he can carry a film on his own.

Jessica Chastain has definitely made a name for herself last year as Hollywood's "it" girl. She bears resemblance to a Persona-era Liv Ullmann, and has acting abilities to match. Many of her thoughts and emotions are played across her face. Saying she has a promising future in Hollywood is an understatement.

Shannon and Chastain having differing acting styles yet they compliment one another. Shannon's style consists of him making his presence clear the moment he appears. Chastain rather let the audience acknowledge her presence then showcase her skill as an actress. And personally in regards to one scene, I'm not sure what left me more speechless: Shannon's meltdown or Chastain's reaction to it.

Take Shelter really lingers in your mind once the credits start to roll. It shows how obsessive one person can become in a certain situation. Oh, and AMPAS? You fail for not nominating two of the best performances of 2011.