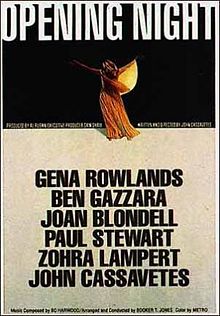 There's a brief sequence in John Cassavetes' Opening Night that triggered a slight pang of nostalgia. Myrtle Gordon (Gena Rowlands) arrives at the theater drunk out of her mind. At the orders of her director Manny Victor (Ben Gazzara), she stumbles to her dressing room with no help. I couldn't help but recollect the final scene of On the Waterfront, Terry staggering up the docks.

Myrtle is similar to Terry. Both are pretty much on their own with their personal conflicts thought they get some reassurance from their peers, and by the end they're down but definitely not out.

Myrtle is also similar to Margo in All About Eve. Both acclaimed names of the stage, they aren't exactly the type that willingly accepts their age. Yet the thought of youth bothers them even more. Well, more so the lack of it within them.

Both are daunted by both the death of their youth and the presence of another's. For Myrtle, it's that of a young fan whom she witnessed get killed. It's from that incident Myrtle realizes that life is too short and hers is almost over. Like Margo, Myrtle has a personal crisis but hers is much more severe than Margo's.

Did Cassavetes put these allusions in his film on purpose? Maybe, maybe not. One thing's for certain: the man knew how to hit the right notes with his troupe of actors. Along with A Woman Under the Influence, Opening Night contains Rowlands' best work. (No surprise her best work was in films made by her husband of thirty-five years.)