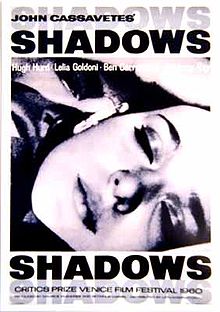 Independent film made it big during the late 1960's, mainly with Easy Rider. Or so the film historians say. In reality, it started in 1959 with John Cassavetes' Shadows.

1959 was pretty much a big year for the world of film. The entries ranged from funny (Some Like It Hot) to exciting (Ben-Hur) to scandalous (Anatomy of a Murder, Suddenly, Last Summer) to entertaining (North by Northwest, Rio Bravo). Where does Shadows fit in? Simple: none of them.

Shadows was essentially a groundbreaking film because of several reasons. Rather than starring A-list movie stars, it stars actors who perhaps just arrived on the scene. Instead of following a script, many of the actors ad-lib their lines. Nowadays, both of those details are common among independent productions. They've got Cassavetes to thank.

Shadows also doesn't strictly focus on one story. It rather flows through the lives of the main characters. In a sense, we're watching their lives unfold as we hide in the shadows.

What else to say about Shadows? Just this. One can pick up on the directing style Cassavetes would become immortalized for. What is that style? Glancing at someone's life as though you are watching from the outside.