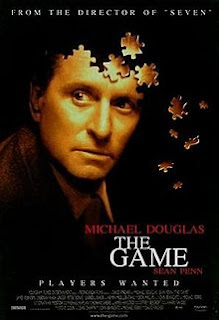 Is there a weird requirement that directors names David have to make at least one film that fits into the fucked-up category? Hey, that theory has been proven by the likes of Lynch and Cronenberg.

Another David that tests the theory is David Fincher. His entry is The Game, made between Se7en and Fight Club. In all honesty, I was shouting "What the FUCK?" a lot when I was watching it. Mind you, that's a good thing.

I'm tempted not to say anything about the plot since I'm still trying to piece together the whole thing. However, I will part with some knowledge of it. What The Game focuses on is a conspicuous corporation. There, that's all I'm saying.

There are so many factors to The Game that practically make it Fincher's tribute to both Hitchcock and Frankenheimer. Along with Fincher's meticulous direction, there's also Howard Shore's eerie music. Also, the immense lack of light, natural or otherwise, amps up the creepiness of it all.

Holy crap, The Game is messed up. It drags on a bit in the middle, but it's really effective. If you want to make your brain work a mile a minute, then David Fincher's The Game is your best bet.