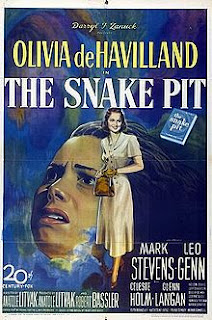 I've always liked Olivia de Havilland. She provides bouts of cheeriness in many of her films. However, I had only seen her in costume dramas (The Heiress, Gone with the Wind, The Adventures of Robin Hood, My Cousin Rachel) so I wanted to see her in something more...contemporary.

I found that in the form of Anatole Litvak's The Snake Pit. As Virginia Cunningham, de Havilland shows the audience what she can do. What does she do? She showcases the fragility of the human mind.

The Snake Pit was a film that was way ahead of its time. Bear in mind this was decades before One Flew Over the Cuckoo's Nest (a glimpse into life in a mental institution) and A Woman Under the Influence (a glimpse into life close to the breaking point). In fact, it paved the way in both Hollywood and real life with this subject.

de Havilland herself is an eye opener here. Gone are her performances as the quiet woman, and here is a part that has all engines running. She teeters on the brink of mental collapse, even when she's on the road to recovery. It almost comes as no surprise that some people had to be told she was acting.

The Snake Pit is a bit of a hard watch, but also a fascinating one. Litvak depicts a hell you can't even begin to imagine, and de Havilland is one of the unlucky occupants. A very bold film for its time.