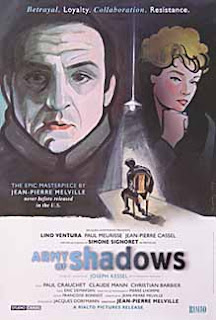 Jean-Pierre Melville was an interesting sort of director. On the one hand, he knew how to depict the criminal lifestyle. (Or at least from what I've seen by him so far.) Yet on the other hand, there is that detached aura in his work.

Such is the case with Army of Shadows, perhaps Melville's most highly regarded work. We are introduced to an array of people yet we can't really develop feelings for any of them. This isn't a bad thing, mind you, but rather as a better way to grasp the story of it all.

But what is the story of Army of Shadows? There isn't one specific story but rather many of them. All of them have one major connection: the French Resistance, which Melville himself was a part of. The aura of detachment is also in affect here. Melville was detached by his country's government, so he put that feeling into his film.

Army of Shadows was released barely a year after the student riots of May 1968. (No surprise that the film wasn't much of a success in France.) The politics in the film and those on focus in the protests are one in the same. The power of the government becomes too much for its citizens, so they decide to fight back.

Army of Shadows is neither a history lesson nor a war film. Think of it more as Melville's memories of the Resistance. Also, those 144 minutes just fly by, just as any great film should.