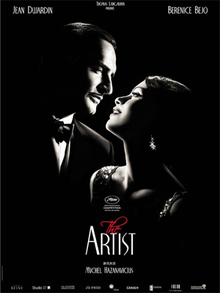 2011 has to be the year of confused movie marketing. Nicolas Winding Refn's Drive focused heavily on action when it's really more of a character study in a similar vein to Michael Mann's work. Steve McQueen's Shame hyped about its NC-17 rating rather than showcasing how bold of a film it is.

Then there's Michel Hazanavicius' The Artist. Ever since it got into the public eye, it has been marketed as nothing more than a silent film. Indeed the lack of dialogue and sound effects are in full swing for most of the film, but there's so much more than that. (When will people ever learn?)

I couldn't help but think that Singin' in the Rain was an influence for The Artist. George Valentin (Jean Dujardin) is a mix between Gene Kelly's Don Lockwood (the charismatic leading man) and Jean Hagen's Lina Lamont (the vain movie star) while Peppy Miller (Berenice Bejo) is reminiscent of Debbie Reynolds' Kathy Selden (the young woman aspiring to break into show business). The fact both films focus on Hollywood's transition from silents to talkies also helps.

I admire Hazanavicius for putting allusions to the silent era in his script, more specifically what happened to its stars after the advent of talkies. He must have done his research on the subject because like many silent film stars, George goes through financial and personal ruin following the advent of talkies and the stock market crash.

Recently there has been backlash against The Artist (as with the case of any frontrunner for the Best Picture Oscar). Really, is it needed at all? It's a magnificent film. Like Martin Scorsese's Hugo, The Artist depicts an era in film history that still leaves an impact decades and generations later.

My Rating: *****
Posted by MovieNut14 at 4:05:00 PM
Email ThisBlogThis!Share to TwitterShare to FacebookShare to Pinterest
Labels: 2010s, movies, reviews