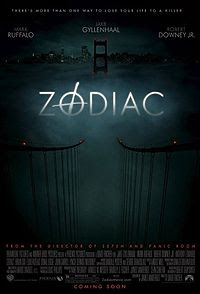 Robert Graysmith (Jake Gyllenhaal) is a cartoonist who works for the San Francisco Chronicle. His quirky ways irritate Paul Avery (Robert Downey, Jr.), a reporter whose drinking gets in the way of doing his job. The two become friends thanks to a shared interest: the Zodiac killer. Graysmith steadily becomes obsessed with the case, as Avery's life spirals into drunken oblivion. Graysmith's amateur sleuthing puts him onto the path of David Toschi (Mark Ruffalo), a police inspector who has thus far failed to catch his man. Graysmith's job, wife and children all become unimportant next to the one thing that really matters: catching the Zodiac.

Although I very much admired Se7en, I think David Fincher tried too hard to make Zodiac like it. But I still like it. Gyllenhaal, Downey and Ruffalo give good performances. I probably would've liked it more if it was just a little shorter. If you're interested in criminology like I am, I recommend Zodiac to you.

My Rating: ****1/2
Posted by MovieNut14 at 8:47:00 AM
Email ThisBlogThis!Share to TwitterShare to FacebookShare to Pinterest
Labels: 2000s, director: David Fincher, movies, reviews