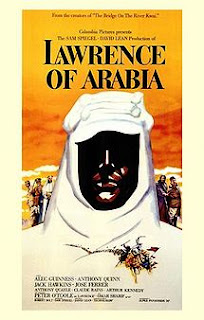 What classifies a movie as an epic? An epic is considered "human drama on a grand scale". I have seen many in my short but busy life (The Godfather, Schindler's List, Spartacus) and although they're three-plus hours long, they fly by just from their tru brilliance.

T.E. Lawrence (Peter O'Toole) is a bored British officer who seeks adventure in the desert during World War I. Lawrence manages to convince his superiors to allow him to make his desert journey so that he can possibly assist in forming a coalition among fractious Arab tribes against their common enemy, the Turks. Once there, Lawrence experiences success beyond his wildest imagination and is lionized for his vision and leadership.

Oh my God, what to say about Lawrence of Arabia? I'll start with the obvious. The cinematography is STUNNING and the music just fits perfectly with every scene. Had there not been such a huge competition that year, O'Toole definitely would've won the Oscar. Thank you David Lean for directing a powerful and brilliant epic. Oh, and if you want the true effect, watch this on a big screen.