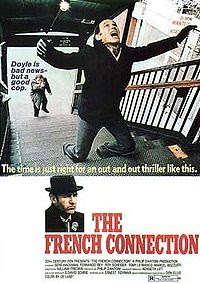 Movies from the 1970's are renown for their edginess. Their content has stuff that ten years earlier would've have had audiences going "Whoa!" Basically, stuff like drugs, blood-soaked crimes and all that good stuff in between.

Alain Charnier (Fernando Rey) is a dapper businessman from Marseilles, Frances, who is in reality a drug lord working on a big score to sell $32 million worth of 89% pure heroin to New York City. But his potential buyer, small-time hood Salvatore Boca (Tony Lo Bianco), is being tailed by undercover cops Jimmy "Popeye" Doyle (Gene Hackman) and Buddy "Cloudy" Russo (Roy Scheider).

Oh man, this is branded "guy movie" big time. I mean, really. The famed car chase scene alone proves that. Hackman's character of "Popeye" Doyle shows those the hard way he's a cop you shouldn't mess with (much like his other Oscar-winning performance in Unforgiven). Most Best Picture winners lose their edge as the years go on. Not The French Connection.