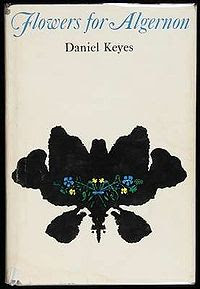 Like I said before, it takes a lot for a book or a movie to tug at my heartstrings. One book that managed to do that was Flowers for Algernon.

Charlie Gordon is a man who was born with an unusually low IQ. He has been chosen to be the test subject of an experimental surgery that could raise his intelligence, something already proven successful with a mouse named Algernon. The experiment's a success with Charlie and his intelligence surpasses that of the doctors behind the whole thing. But then Algernon starts to shows side effects. Will it happen to Charlie?

Oh man, I love this book. When the book starts coming to an end, i honestly felt my heart ache to no end. It's just so tragic. And I love it. It's the most heartbreaking novel I've read in a long time. I recommend it highly.

My Rating: *****
Posted by MovieNut14 at 8:38:00 AM
Email ThisBlogThis!Share to TwitterShare to FacebookShare to Pinterest
Labels: books, reviews