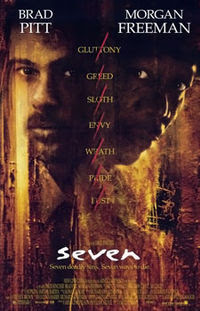 I have seen several horror movies and numerous Alfred Hitchcock movies, all of which only scared me a little bit. But the one movie that truly scared the hell out of me was Se7en.

Days from his retirement, veteran detective William Somerset (Morgan Freeman) is teamed up with his replacement David Mills (Brad Pitt) to solve a series of murders based on the seven deadly sins. Will they find the killer before his demented plan is complete?

As I was watching this, I felt parts of my back go numb. At first, I thought it was nothing. Then I realized what it was: I was literally paralyzed with fear.

This is definitely not a movie to toy with. The opening credits along prove that. The Howard Shore music just make every scene creepier. The murder scenes are unsettling and the suspense almost puts Hitchcock to shame. Kevin Spacey, in my opinion, was practically primed to play a villian, mainly because his supposedly calming voice is actually really unnerving in this. If you're looking for a movie that's guranteed to scare the fuck out of you, your search is over.

My Rating: *****
Posted by MovieNut14 at 8:47:00 AM
Email ThisBlogThis!Share to TwitterShare to FacebookShare to Pinterest
Labels: 1990s, director: David Fincher, movies, reviews