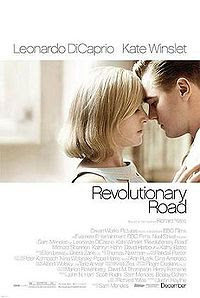 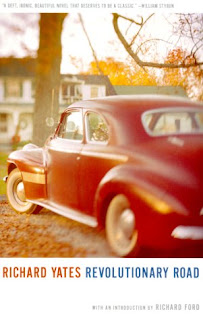 I have read works that usually takes a while for them to get interesting. Same thing goes for the occasional movie.
Frank and April Wheeler are a young couple whose marriage has hit a snag and have grown bored with suburban life. April suggests they move to Paris, to which they plan vigorously for. But problems arise and tensions flare when Frank gets a promotion and April becomes pregnant.
Richard Yates' writing is unique from other writers I've read. He points out a character's flaws as they're introduced rather than showing them as the novel progresses. That I like.
I recall when the movie was released everyone was saying it was going to be like Titanic. Well, no. Here, Kate and Leo are an unhappily married couple (which is evident in one of the first scenes alone). The only thing that makes Revolutionary Road like Titanic is that one of them is dead by the end of the movie. A few good scenes from the book weren't in the movie, which I didn't like. DiCaprio and Winslet delivered good performances, but Michael Shannon steals the movie right from under their noses. To sum up what I was saying before, Revolutionary Road is the anti-Titanic.
What's worth checking out?: I'd go with the book.
Posted by MovieNut14 at 8:35:00 AM
Email ThisBlogThis!Share to TwitterShare to FacebookShare to Pinterest
Labels: book vs. movie, director: Sam Mendes, reviews