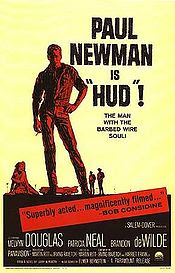 (sigh) Paul Newman. He was such a good actor. Makes me bummed that he's no longer with us.

Hud Bannon (Newman) is a ruthless young man who tarnishes everything and everyone he touches. Hud represents the perfect embodiment of alienated youth, out for kicks with no regards for the consequences. There is bitter conflict between him and his stern and highly principled father Homer (Melvyn Douglas). Hud's nephew Lon (Brandon De Wilde) admires Hud's cheating ways, though he soon becomes aware of Hud's reckless amorality to bear him anymore. In the world of the takers and the taken, Hud is a winner.

This is one of Newman's best performances. He portrays a character you're supposed to dislike, but his charm keeps you from doing that. The performances from Melvyn Douglas and Patricia Neal are also especially good, mainly Neal. The cinematography by Jame Wong Howe is breathtaking and the movie is a fine piece of filmmaking.