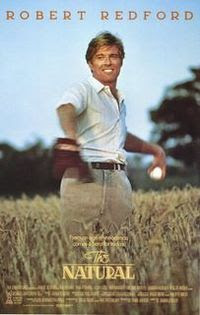 Baseball: the national pasttime. When it comes to the movies, it's just as great as the sport itself.

Roy Hobbs (Robert Redford) could have been the greatest to ever play the game until a scandalous incident sidetracked his career. Years later, Roy is back, hoping to take one last crack with the struggling New York Knights. The problem is, no one on the team believe there's anything left in this aging rookie.