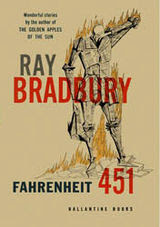 "It was a pleasure to burn" is what the novel opens with. Guy Montag is a fireman who doesn't put out fires but starts them; he is to burn books and the houses that contained them. He doesn't question his job until his new neighbor, a seventeen-year-old by the name of Clarisse McClellan, opens him to a past when people weren't afraid.

I found the thought of books being illegal somewhat scary (being the avid reader that I am). And having read a few of Ray Bradbury's short stories prior to reading Fahrenheit 451, I knew that the tone in his writing is anti-technology. The descriptions are vivid and the plot is easy flowing. But overall, it's a very impressive novel.

My Rating: ****
Posted by MovieNut14 at 8:28:00 AM
Email ThisBlogThis!Share to TwitterShare to FacebookShare to Pinterest
Labels: books, reviews