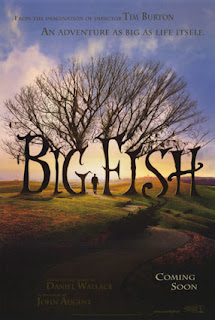 If you've been reading this blog long enough, you know that I'm a fan of Tim Burton. Having seen all but three of his works, you could say I'm somewhat of an expert. Anyway, onto the review.

Big Fish follows the incredible life of Edward Bloom (Albert Finney), through a series of flashbacks that begin when his son Will (Billy Crudup) visits him for the last time. Edward is dying of cancer, and Will hasn't spoken to him for years because Will believes him to be a liar that never really cared for his family. As Edward's story unfolds once again, Will tries to finally understand the truth about who his father really was...

You gotta give Burton credit. He directed this in response to his parents' deaths, so the feeling of losing a parent is pretty strong. It's definitely a far cry from his earlier work, which are more dark and gloomy. Big Fish, meanwhile, is more bright and cheerful. It's one of those movies that makes for good discussion.