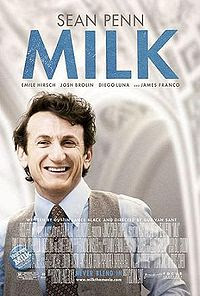 I try to avoid movie focusing on heavily debated subjects (ie, gay rights, capital punishment) because I know if I bring up the movie it'll start a heated discussion. But if the movie is one of the best-reviewed movies of its release year, then I'll see it.

Milk chronicles the career of openly gay politician Harvey Milk (Sean Penn). His acts to get gay rights in San Francisco garners not only respect and friends, but also more than a few enemies.

Penn delivers a strong performance as Harvey Milk. He acts alongside a stellar supporting cast which includes Josh Brolin, Emile Hirsch, Diego Luna and James Franco. The movie made my views on gay rights strengthen a bit. As I've stated a few times before, I'm for gay rights. And Milk opened me to the background of the movement.