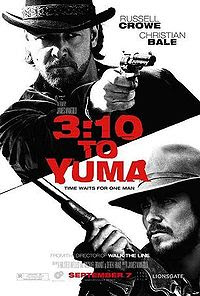 I've been seeing a lot of westerns lately. Ranging from featuring John Wayne to Clint Eastwood to the actors in between, directors from John Ford to Sergio Leone, and having loads of action, they are always entertaining.


Rancher Daniel Evans (Christian Bale) agrees to help take outlaw Ben Wade (Russell Crowe) to the 3:10 train to Yuma for his trial. But Wade is a cunning outlaw, so Evans has to keep a sharp eye on him. Throw in having Wade's gang coming after them and it's a fight for their lives.


So awesome. Take note that the final scenes are a homage to High Noon. By that, I mean as time passes the suspense builds. The thrill of an Eastwood western, the intensity of a John Wayne western, 3:10 to Yuma is just damn good. Bale and Crowe are a good actor pairing for this particular movie. Ben Foster, who plays a member of Wade's gang, is also very good. If you're a fan of westerns, this is just for you.


My Rating: ****1/2
Posted by MovieNut14 at 9:17:00 AM
Email ThisBlogThis!Share to TwitterShare to FacebookShare to Pinterest
Labels: 2000s, director: James Mangold, movies, reviews