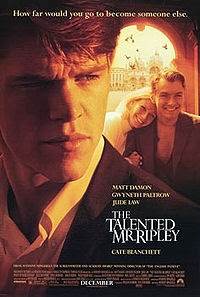 Ever since Alfred Hitchcock left an impact on Hollywood, many have tried to copy his success. There have been many imitators but few have had the same effect.

After being assumed by a wealthy couple as a friend of their son, Tom Ripley (Matt Damon) agrees to go to Italy to bring back the Greenleafs' son Dickie (Jude Law), even though they've never met. Tom manages to charm both Dickie and his girlfriend Marge Sherwood (Gwyneth Paltrow) at first, but Dickie tires of Tom, causing major problems later on.

This is something you should take note of when you watch The Talented Mr. Ripley. When we're first introduced to Tom, the real Tom, he is perceived as an undignified square. But when he's pretending to be someone he's not, he becomes a much more interesting person.

The Talented Mr. Ripley is perfectly cast (along with Damon, Paltrow and Law, it also features Cate Blanchett and Philip Seymour Hoffman). Damon is great as the cunning con. Law is probably the first actor since Brando in A Streetcar Named Desire to play a character that just oozes sexuality. And like Brando's Stanley, Law's Dickie is self-centered and he uses people for his own gain. To sum it up, The Talented Mr. Ripley is a very sexy and great thriller.

My Rating: *****
Posted by MovieNut14 at 8:47:00 AM
Email ThisBlogThis!Share to TwitterShare to FacebookShare to Pinterest
Labels: 1990s, director: Anthony Minghella, movies, reviews