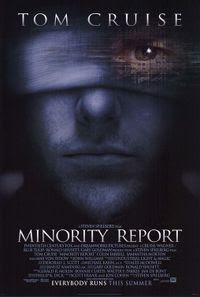 Sci-fi is an interesting genre on its own. Combine it with film noir and you got a really intriguing movie. Even more so if it's directed by one of the most prolific directors in Hollywood.

John Anderton (Tom Cruise) is a police officer who works for "Pre-Crime", an elite unit that predicts crimes before they happen. However, Anderton discovers that he will kill a complete stranger in less than 36 hours, making him a fugitive.

What can you expect from Steven Spielberg besides a freakin' awesome movie? Because that's what Minority Report is. Having read Do Androids Dream of Electric Sheep? (its movie counterpart is better known as Blade Runner), another Philip K. Dick work, I already had a sense of the neo-noir that's a feature to his work. It's just so awesome. Interesting that I said that since I'm not that big of a fan of science fiction.

My Rating: *****
Posted by MovieNut14 at 9:52:00 AM
Email ThisBlogThis!Share to TwitterShare to FacebookShare to Pinterest
Labels: 2000s, director: Steven Spielberg, movies, reviews