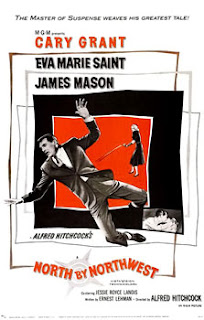 When the name of Alfred Hitchcock is mentioned, the main five movies that come up are Psycho, Rear Window, Vertigo, The Birds and North by Northwest, the latter I will be reviewing.

Advertising executive Roger Thornhill (Cary Grant) gets mistaken for a man by the name of George Kaplan. As he tries to prove he isn't Kaplan, Thornhill almost unwittingly gets involved in a murder case where he is the accused murderer.

In typical Hitchcock style, he brings on the suspense early on. The difference is he reveals one of the major twists early on, which actually works rather than have the movie decline in quality. The chemistry between Grant and Eva Marie Saint is good. This is definitely one of Hitchcock's best.