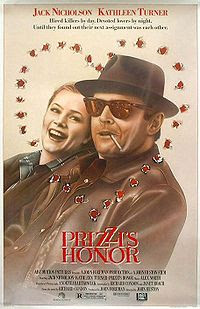 I think since I saw The Godfather last year I've been seeing more crime-based movies.

Charley Partanna (Jack Nicholson) is a hitman who works for the Prizzis, one of the richest crime syndicate families in the country. Unbeknowst to Charley, the Prizzis just hired free-lance killer Irene Walker (Kathleen Turner) to eliminate someone who double-crossed them. When Irene and Charley fall in love, their jobs become complicated.

Now I like the occasional crime comedy, but this just didn't work for me. Don't get me wrong. I liked it. It's just that it felt a little...off for me. Turner plays the ideal femme fatale while Nicholson is the unfortunate man to fall into her trap.

My Rating: ****
Posted by MovieNut14 at 9:38:00 AM
Email ThisBlogThis!Share to TwitterShare to FacebookShare to Pinterest
Labels: 1980s, director: John Huston, movies, reviews