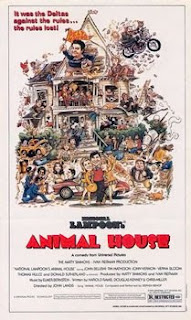 It's lewd. It's crude. It's rude. And also one of the funniest movies I've seen.

Delta House: the worst fraternity at Faber College. It's also the only fraternity that accepts Kent "Flounder" Dorfman (Stephen Furst) and Larry "Pinto" Kroger (Tom Hulce). Dean Wormer (John Vernon) has gotten fed up with the Deltas' antics and will do anything to bring them down. But the Deltas, especially John "Bluto" Blutarsky (John Belushi), aren't going down without a fight.

I will admit that Animal House was originally the funniest movie I've ever seen, but bear in mind I saw this before I saw more sophisticated comedies like The Apartment or Some Like It Hot. It's still funny though. And the fact I can quote Bluto's rousing if historically inaccurate speech to the defeated Deltas makes Animal House a movie that's forever embedded in America's subconscious.

My Rating: *****
Posted by MovieNut14 at 9:35:00 AM
Email ThisBlogThis!Share to TwitterShare to FacebookShare to Pinterest
Labels: 1970s, movies, reviews