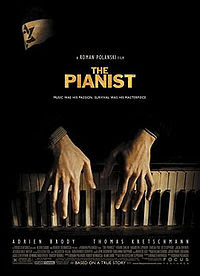 I find movies on the Holocaust more believable if the director was either alive during that time and/or survived it. Yes, Steven Spielberg experienced neither, I know, but he's an exception with Schindler's List. Anyway, Roman Polanski's The Pianist shows his views on the event.

Wladyslaw Szpilman (Adrien Brody) is a Polish Jew who is an accomplished piano player. At the outbreak of the Second World War, he becomes subject to the anti-Jewish laws imposed by the conquering Germans. By the start of the 1940s, Szpilman has seen his world go from piano concert halls to the Jewish Ghetto of Warsaw and then must suffer the tragedy of his family deported to German concentration camps, while he is conscripted into a forced German labor compound. At last, he decides to escape. For years, he struggles to survive as the Germans take over.

Schindler's List is in the German's point of view; The Pianist is in the Jew's pointof view. The fact that Polanski based some of the scenes off of his own experiences of the Holocaust gives it a more stunning feel. Brody gives a marvelous performance as Szpilman. The feeling of isolation throughout the second half makes the movie feel more absorbing as though we have been through that. Along with Schindler's List, The Pianist is one of the best movies on the Holocaust and the German occupation.

My Rating: *****
Posted by MovieNut14 at 9:44:00 AM
Email ThisBlogThis!Share to TwitterShare to FacebookShare to Pinterest
Labels: 2000s, director: Roman Polanski, movies, reviews