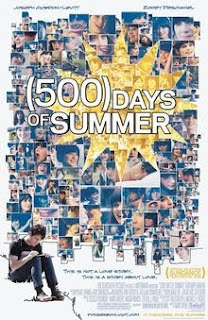 The problem with romantic comedies today is that there's too much comedy and not enough romance (or sometimes vice versa). Thankfully, there are some that break the barrier.

An unconventional love story about Summer Finn (Zooey Deschanel), a woman who doesn't believe in true love, and Tom Hansen (Joseph Gordon-Levitt), the man who falls for her.

(500) Days of Summer is different from the romantic comedy of today becuase it doesn't rely on bad jokes and sex (or bad sex jokes); it relies on actual emotions. Gordon-Levitt and Deschanel make a really cute couple. The movie is really sweet. It's now one of my favorite romantic comedies (along with The Apartment). It's not one to be avoided.

My Rating: *****
Posted by MovieNut14 at 9:13:00 AM
Email ThisBlogThis!Share to TwitterShare to FacebookShare to Pinterest
Labels: 2000s, movies, reviews