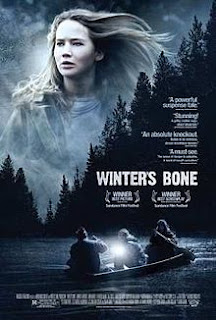 As for usual Hollywood standards, most female roles tend to cross into degrading territory. That's mostly for studio movies, mind you. At least independent movies are more focused on character examination rather than making money.

Debra Granik's Winter's Bone does have character examination, mainly in the roles by Jennifer Lawrence and John Hawkes (fittingly the two Oscar nominees). Lawrence may be the principle character, but I feel that Winter's Bone loses something when Hawkes isn't on screen.

Winter's Bone is also successful at depicting the rugged life some people have to face. Some will do anything to save or earn money, but they stop at desperate measures. The bleak weather and lack of light adds to the moody nature of the movie.

If you think this would be a positive review, think again. The narrative for this was so dense, I was certain I was going to fall asleep. The only things keeping the movie afloat are Lawrence and Hawkes. Everything else is weak.

My Rating: ***1/2
Posted by MovieNut14 at 6:00:00 PM
Email ThisBlogThis!Share to TwitterShare to FacebookShare to Pinterest
Labels: 2010s, directed by women, movies, reviews