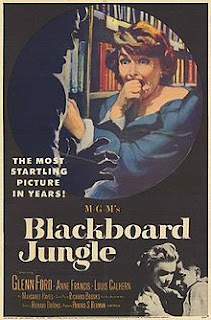 There are movies that showcase prominently what period of time they're from. Sometimes it works, other times not so much.

Blackboard Jungle practically screams out that it was made in the 1950's. Don't get me wrong. It's a good movie, but it's just that the subject matter is something that could only be pulled off in the 1950's. It wouldn't have worked in any other decade.

Compare Blackboard Jungle to Rebel Without a Cause, which was released the same year. Both focus on the subject of juvenile delinquency, but they're from different perspectives. Blackboard Jungle is from the adults' point of view while Rebel Without a Cause is from the teenagers' point of view. Either way, both movies depict how misunderstood teenagers during the 1950's were.

Blackboard Jungle, as I mentioned, is good but it's too 1950's. What's shown isn't relevant to today's standards, however one could view this as an exploitation movie (or something of the sort). All in all, it's worth checking out to those who are curious.