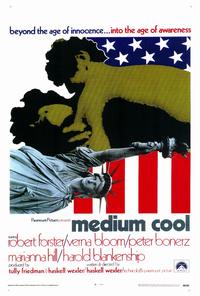 1968 was a hell of a year. There were countless riots because of the Vietnam War, as well as civil rights. The biggest news of the year were the assassinations of Martin Luther King, Jr. and Robert Kennedy. Many books and movies were inspired by the events of 1968.

One such movie is Haskell Wexler's Medium Cool. Wexler, better known for his cinematography in Who's Afraid of Virginia Woolf?, presents the events of 1968 not as a focal point but as a minor detail to the story he wrote and directed. (And, yes, did the cinematography for.)

Robert Forster, more familiar to today's audiences from his Oscar-nominated turn in Jackie Brown, I particularly liked here. He works for a Chicago news station, but isn't interested in most of the stories he covers. He's more into the human interest stories than the ones on politics. This is why RFK's assassination is treated as something unimportant in the story.

Medium Cool is a very well done movie. It's not a political thriller in the vein of The Manchurian Candidate but rather as a retrospective of the 1960's. I admire that a majority of the movie is shot in documentary-style, which adds to how hectic the time period was.

My Rating: ****1/2
Posted by MovieNut14 at 7:30:00 PM
Email ThisBlogThis!Share to TwitterShare to FacebookShare to Pinterest
Labels: 1960s, movies, reviews