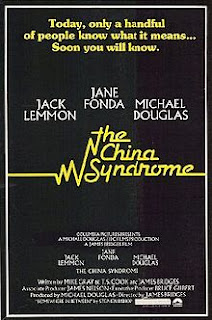 You know how some manage to predict events in life before they happen? The most recent example is the Chilean miners and the media frenzy surrounding it. Billy Wilder covered an almost identical story fifty-nine years earlier with Ace in the Hole.

The China Syndrome stars Jack Lemmon, Jane Fonda and Michael Douglas, three actors I call favorites. It's amusing with Fonda and Douglas because both exhibit traits their fathers were known for in their work. Fonda shows determination in getting the right facts while Douglas raises hell in his wake. But this show belongs to Lemmon. He adds the touch of experience within the trio. He also displays what happens when you thought you knew everything about something.

The China Syndrome is one of those movies that grabs you and doesn't let go until the very end. Your nerves will become taut as the movie progresses. Plus, who doesn't love a conspiracy thriller?

My Rating: *****
Posted by MovieNut14 at 5:22:00 PM
Email ThisBlogThis!Share to TwitterShare to FacebookShare to Pinterest
Labels: 1970s, movies, reviews