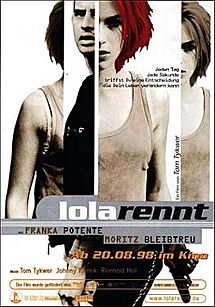 Every time I see a movie that has received nothing but high praises, I have to be cautious. It can't always be as good as others say. (I learned that after seeing Citizen Kane.)

Good thing Run Lola Run is as good as everyone says it is. The concept has been done a bunch of times in other movies that don't generally work. Run Lola Run presents the concept that is so simple as something fresh.

This was made during the MTV era of the 1990's, so naturally it would feel that it was made for the MTV crowd. In reality, Run Lola Run is made for everyone. It's not targeted at a specific audience but rather at those who want to get their money's worth from a movie.

Run Lola Run is a very good movie, but I had a problem or two with the narrative. I found it a bit jumpy in spots, but that's a minor detail. All in all, Run Lola Run is worth checking out.

My Rating: ****1/2
Posted by MovieNut14 at 6:31:00 PM
Email ThisBlogThis!Share to TwitterShare to FacebookShare to Pinterest
Labels: 1990s, movies, reviews