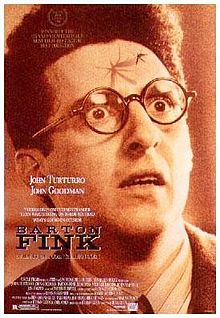 Joel and Ethan Coen are one of the most compelling duos in the film industry. Their movies are different from others'. I don't mean that in a bad sense; it shows their work is memorable.

Barton Fink depicts the life that was 1941 Los Angeles, which by all accounts wasn't as glamorous as it was cracked up to be. Around that time, established writers and playwrights were being commissioned by studios, and were disappointed by the Hollywood treatment. They thought they would be getting more out of what they were being paid.

John Turturro, a frequently underused actor, stars in the title role of the Clifford Odets doppelganger. Through his bouts of writers' block while cooped up in a Los Angeles hotel, he encounters a mysterious salesman (a villainous John Goodman).

Barton Fink conveys the many themes of the Coen brothers, however it's much darker than some of their other work. The performances by Turturro and Goodman are great. To those wanting a glimpse of Hell on earth, you'll find it in the form of Barton Fink.