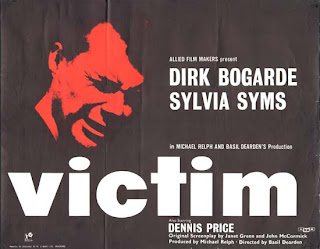 By the time the 1960's rolled around, there were a lot of movies that were considered groundbreaking, most of them released during the 1960's.

Decades before Brokeback Mountain, Victim was released when homosexuality was still considered a crime in both the United States and the United Kingdom. It was a daring move for director Basil Dearden, an even more daring movie for star Dirk Bogarde who had established himself as a leading man (and was also gay).

Bogarde gives one hell of a performance as Melville Farr. A number of his shots has a beam of light focused on his face, mainly his eyes. Bogarde was one of those actors who acted his eyes as much as he did with his words. That's what makes that beam of light important. He shows a wounded nature within, especially early on.

Victim is a really great movie, however it gets a tad crammed after a while. I love Bogarde's work as stated earlier. This was perhaps responsible for movies of similar themes released within the last thirty or so years. Because after all, one thing can have a big effect.

My Rating: ****1/2
Posted by MovieNut14 at 7:00:00 PM
Email ThisBlogThis!Share to TwitterShare to FacebookShare to Pinterest
Labels: 1960s, movies, reviews