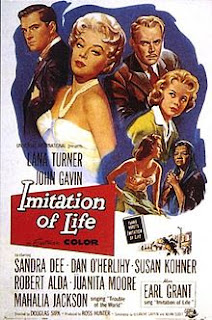 With some directors, I usually associate them with the things and/or themes in their movies (ie, Fellini's religious imagery, Tarantino's cuss-filled dialogue, Hitchcock's mysterious blondes, Hawks' fast-talking women, etc.). It can lead to problems however.

Take Douglas Sirk for example. In the way critics and film lovers describe him, Sirk is viewed as making overly dramatic "women's pictures". After seeing Magnificent Obsession, I went with that for some time. When I saw Imitation of Life, that stereotype of Sirk was thrown out the window.

The main characters of Imitation of Life are two mothers and two daughters. Lora Meredith (Lana Turner) is a stage actress who tries to be a good mother to Susie (Sandra Dee), but her career constantly interferes with her family life. Lora's maid Annie Johnson (Juanita Moore) tries to regain the love of her daughter Sarah Jane (Susan Kohner), but it's impossible because Sarah Jane refuses to accept that she has mixed blood. Turner and Dee are the bigger names, but it's Moore and Kohner that make Imitation of Life what it is.

Imitation of Life is a lot better than I originally thought, however I thought it was a little mushy in a few scenes. All in all, this was a fitting send-off for a director like Sirk.