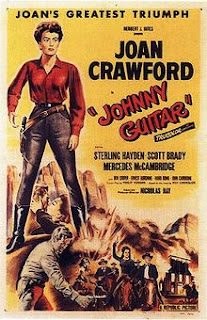 The best thing about Nicholas Ray is that he takes genres that are immensely popular and turns them around on their heads. Bigger Than Life made social dramas of the 1950's look like bad soap operas. In a Lonely Place and They Live By Night added new perspectives to film noir.

Like Howard Hawks' Rio Bravo five years later, Ray's Johnny Guitar shone a new light onto the Western. Both focus on the principle characters more than the action. Both have characters that capture the audience's attention. Both are made for those not that into Westerns, like yours truly.

What makes Johnny Guitar unique is its use of role reversals. The bandits are actually good guys, the townspeople are villains, and the women wear the pants in this show. After all, we learn early on that Vienna (Joan Crawford) and Emma (Mercedes McCambridge) are two dames you shouldn't cross.

God, I love what Ray has offered me so far. Rebel Without a Cause, In a Lonely Place, Bigger Than Life, They Live By Night, and now Johnny Guitar. What I like about them the most is that they're unconventional from other movies of the time. That is also why I love Ray in general.

My Rating: *****
Posted by MovieNut14 at 9:43:00 AM
Email ThisBlogThis!Share to TwitterShare to FacebookShare to Pinterest
Labels: 1950s, director: Nicholas Ray, movies, reviews