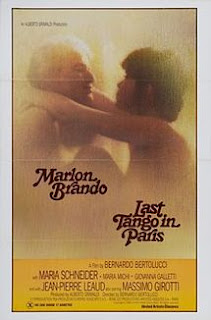 There are always those movies that get a slew of controversy upon their releases. Most of the time the controversy still lingers years later, but it manages to gloss over what the movie is actually about.

Such is the case with Bernado Bertolucci's Last Tango in Paris. It's infamous for its frank depiction of sex. (It's infamous for a few other things, but you know what those are.) In reality, the scenes of intimacy between Paul (Marlon Brando) and Jeanne (Maria Schneider) are mere backdrop to the real heart of the story.

Brando is frequently dubbed the greatest actor of all time (even if we can't hear what the hell he's saying most of the time), and Last Tango in Paris shows as to why. In comparison to some of his earlier roles, Paul could be viewed in a similar vein to Terry Malloy, someone who shuts himself out from what's going on around him. That's only for the first half. The second half showcases Paul as a more brutish Stanley Kowalski. Paul could be viewed as a blending of previous Brando roles but either way, he is from a different part of Brando's range of acting.

Brando's most powerful scene in Last Tango in Paris (and perhaps his best scene in general) is when Paul speaks to his deceased wife. It starts off like a normal conversation, but soon Paul's inner anger starts to boil to the surface. He furiously questions her on she killed herself before he falls apart and tearfully apologizes. A scene like this has been done countless times by numerous actors, resulting in them overdoing the scene. With Brando, he makes the scene his own.