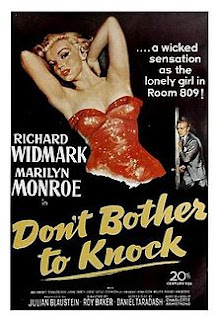 Marilyn Monroe is known as the quintessential sex symbol. Anyone who's seen The Seven Year Itch or Gentlemen Prefer Blondes can see why, But being me, I'm trying to watch some of her more professional work.

So far I've seen Some Like It Hot and The Misfits, as well as her small part in All About Eve. I have also seen her fantastic work in Roy Ward Baker's Don't Bother to Knock. Instead of being the sultry blonde, Monroe's Nell Forbes is someone who is distant from the rest of society. Her mind works differently than everyone else, and you wonder what runs through it.

In a sense, Nell shows tints of Monroe's psyche. She's clearly unhinged just from her own being. Nell is a femme fatale, but not in the same vein as Barbara Stanwyck or Gloria Grahame. In a sense, the only true victim in Don't Bother to Knock is Nell herself.

Don't Bother to Knock is still effective after nearly sixty years. Along with Monroe, there's also some great work from Richard Widmark and a fresh-faced Anne Bancroft. Definitely worth checking out.