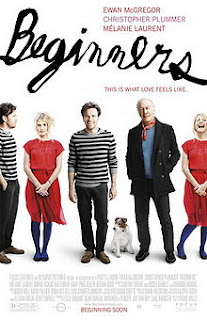 A common theme in some independent movies is sadness. Usually it's because the main character(s) lost a loved one, ended a relationship or it's just within their nature.

In Beginners, we're already told of what has happened with Oliver (Ewan McGregor) within the first few minutes. Shortly after his mother passed away, his father Hal (Christopher Plummer) comes out and embraces the gay lifestyle before he dies. Oliver accepts what Hal has told him, but there's that look of uncertainty on his face.

As he tells his new girlfriend Anna (Melanie Laurent) about his father, you can pick up on the touch of sadness in Oliver's voice and eyes. He's clearly upset over his father's passing, however he's starting to embrace life without Hal. It's a tough task, but he has to do it sooner or later.

I really liked Beginners, mainly for the work from McGregor and Plummer. The simple addition of flashbacks is a nice touch. The low lighting also gives us a glimpse of what's inside Oliver's mind. The thing is though is that the movie is stuck in the same mood for the whole duration. That small flaw aside, Beginners is worth checking out.