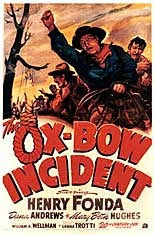 In old movies especially, morals are questioned on a regular basis. At first, some decisions were smart. But after more facts come in, those decisions don't look as smart.

A situation like that is shown in William Wellman's The Ox-Bow Incident. In the aftermath of a shooting, the townspeople are searching for who did it. They're hungry for justice and spilled blood. When they find the men (Dana Andrews, Anthony Quinn, Francis Ford), the only voice of reason in the posse (Henry Fonda) tries to convince the others the men are innocent.

Of the actors, I particularly liked Fonda and Andrews. Fonda because he is always the ideal choice for the voice of reason. (Anyone who has seen 12 Angry Men can agree with me.) Andrews, an underrated actor of the time, because he conveys fear without overdoing it. The close-up of him as he's told of the crimes shows the amount of worry within him building up. (That extra beam of light across his eyes in that shot is a nice touch.) Both are great and should have earned some form of recognition.

The Ox-Bow Incident could be viewed as almost a Western version of 12 Angry Men, however the outcomes for both are vastly different. It may be far from the Hollywood ending most movies of the time had, but there's no denying that the ending for The Ox-Bow Incident is a memorable one.