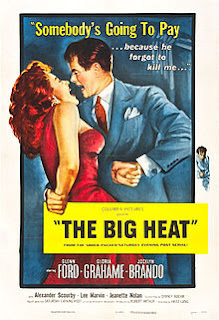 Although I've only seen M and The Big Heat, I know enough that Fritz Lang had a certain style of directing. He had his movies burn slowly to excitement and a hell of an ending.

Glenn Ford is someone I've encountered before in Gilda and Blackboard Jungle. In both, he barely has enough of a spine to stand up for himself. In The Big Heat, he looks as though he's about to rip out someone's spine. Nice to see a man get tough every now and again.

Gloria Grahame was the quintessential femme fatale back in the day. However in The Big Heat, she does somewhat of a variation of the role. Her Debby Marsh doesn't want to harm Ford's Dave Bannion but rather help him with the cases that are slowly consuming him. The only people she wants to harm are those who harmed her. (That pot of coffee to the face had to hurt.)

The Big Heat gets up there as one of the best noirs I've seen. Ford and Grahame deliver their best work in this. Lang also manages to deliver the goods. A must for noir admirers.