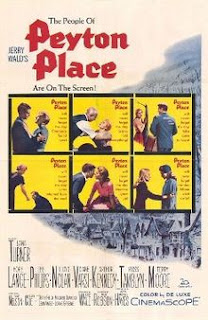 During the 1950's, the melodrama was a popular genre among female audiences. The more popular ones were made by Douglas Sirk, but some were made by others.

Peyton Place by today's standards contains every personal tragedy in the book (rape, suicide, abortion, illegitimacy). After all, these were subjects that were "hush hush" in mixed company back then. But thanks to Mark Robson, he makes this less Douglas Sirk and more dignified soap opera.

Of course like most soap operas, the pinnacle of Peyton Place has to be the actors. The best work came from the actors who were nominated for Oscars: Lana Turner, Diane Varsi, Hope Lange, Arthur Kennedy and Russ Tamblyn. I found it amusing that Turner, a victim of many scandals, was cast where her character has a secret that would destroy her reputation.

All in all, I really liked Peyton Place. The time might be a shock to some (over two and a half hours), but surprisingly the times flies right by though it drags a little in the third act. Again, I just love the performances. This is for those who want a non-Sirk melodrama.