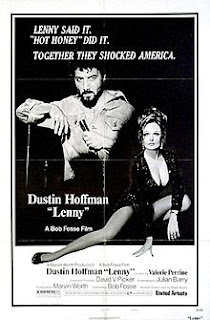 Bob Fosse is famous for his association with musicals, whether it be directing them (Cabaret, All That Jazz) or acting in them (Kiss Me Kate). But he has also done straight-up dramas.

In this case, Lenny. This biopic is about comedian Lenny Bruce, who preceded George Carlin when it came to lewd comedy. Bruce is portrayed by Dustin Hoffman, who is fantastic here. He goes through the plights the average person would've faced then (drugs, infidelity), but Hoffman also shows what's running through Bruce's mind.

Bruce was one of the most outspoken names in the entertainment business (his acts are solid proof). Hoffman shows that underneath the crass persona, there is a person scared of society. In the scenes set in the courtroom, he's constantly looking around the room. He's looking for a way out, mainly through the jury giving him an acquittal. Take note of the scenes after his first arrest. His acts criticize how society judges others, including himself. He's trying to confront society, but it's a losing battle.

Lenny is one of the great movies of the 1970's. Each actor plays their part excellently. If you haven't seen it, then you're in for a treat.